Dr. Hernando D. Robles, university president, received the Institutional Excellence Award, in behalf of the University, for ranking 1st in the 2016 and 2017 Criminologist Licensure Examination while Dr. Famela Iza Cabe-Matic, dean of CCJ also received the Certificate of Excellence, for her outstanding contribution and commitment to criminology profession. The Professional Criminologists Association of the Philippines, Inc. (PCAP) gave both awards in a ceremony held at Hotel Dominique, Tagaytay City, 6 February.

Meanwhile, a Plaque of Recognition was also given by the Professional Regulation Commission (PRC) and the Professional Regulatory Board of Criminology, for ranking 3rd in the December 2017 Criminologist Licensure Examination among 560 colleges and universities with criminology program in the country. The awarding ceremony was held at the Plenary Hall, Philippine International Convention Center (PICC), Pasay City, 17 February.

Out of 36,516 takers in the 2017 Criminologist Licensure Examination, CCJ once again made a mark when 71 out of 75 takers passed the said examination with 94.67% passing percentage as against the national passing percentage of 35.67%. Congratulations!  ARCSolis, CvSU photo credit: FICMatic 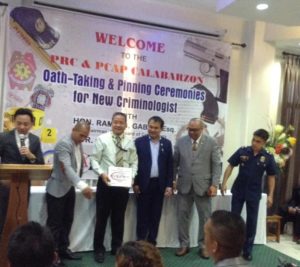